Across  the railway by the cemetery were the directions I received from the Brujo. That was where he sold most of his plants. Pushed in his wheelbarrow through the cobbled streets of Trinidad, Cuba was his mobile market offering his latest rosemary, basil and guava plants.

Wandering off the tourist radar, as per norm, I encountered the Brujo whilst on the search for Ron Mulata (a rum brand) served in a plastic bottle and not glass. Being fairly confident with my Spanish now, I struck up a conversation with him, spoke about plants and arranged to meet him on the Monday and partake in his birthday celebrations.

Now the Brujo is a wizard. Well, a plant wizard. Many people come to him to buy herbal remedies. and if he hasn’t got it, he will get it for you. Many Cubans rely on natural medicine as most processed medication is too expensive to buy or unable to get hold of due to the embargo. 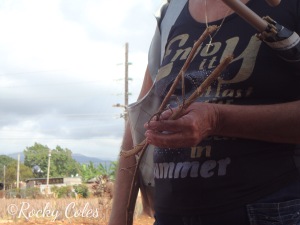 The nursery site contained a large growing area. The soil rather red. Rows of Aloe grew in one section. Their unpleasant pungent yellow flower spikes snapped off to concentrate their potentness. Trust me, after snapping a few of these off, you would want to wash your hands! 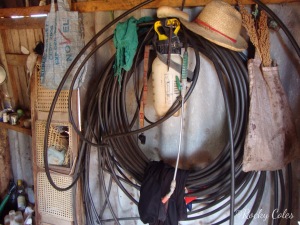 Under the barbed wire fence were raised beds filled with cut flowers, Calendula and lettuce, whilst in the other section basil and mint romped away. Mint is known as yerba buena (the good herb) and not Mentha as in its genus. The good herb I suppose because of its many uses and not forgetting the mojito! Talking of which this writing has kind of gone full circle but I prefer my rum on the rocks if ice is available. As we were without electricity here at the nursery, it was straight out the bottle. Cigars lit, meat on the fire and a good sing along. After all it was the Brujo’s 59th birthday. What a great day and night it was. All achieved with plants, music and madness!

This site uses Akismet to reduce spam. Learn how your comment data is processed.